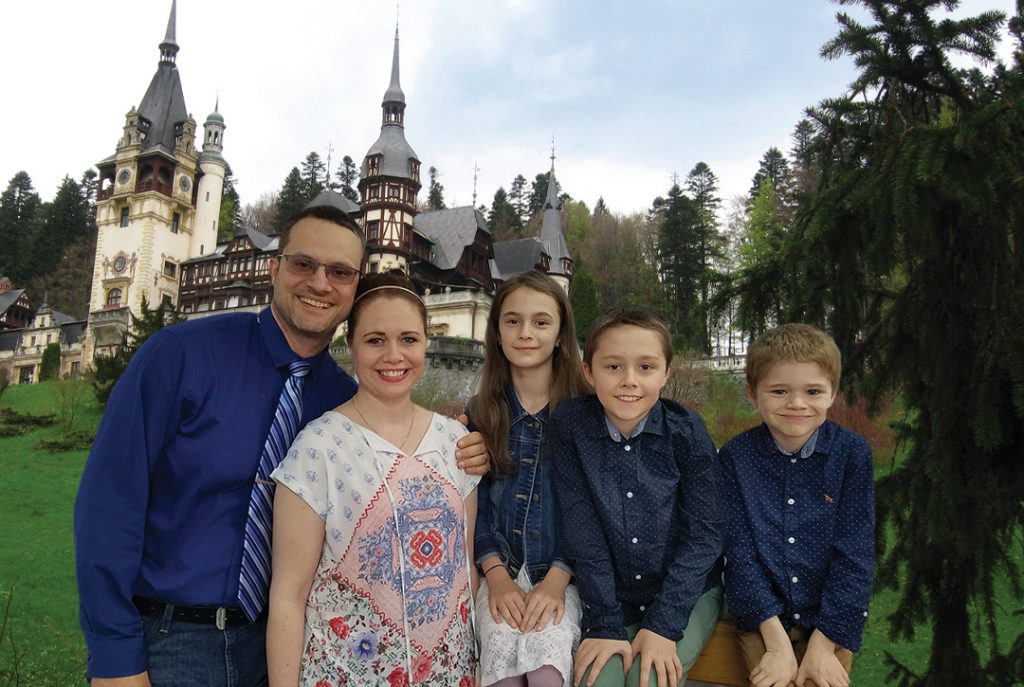 We believe in the Bible, the Trinity, the fall of man, Christ the way of salvation, the interaction of grace and free will, repentance, progressive sanctification, eternal security, the New Testament church, the ordinances of baptism and the Lord’s supper, Sunday worship, civil obedience, the coming day of judgment, and heaven and hell. For a more thorough description of these points, the New Hampshire Confession of 1833, with scripture references, is at https://www.r2rom.com/nhcf1833/.

Salvation Testimonies and Call to Romania

I was born in 1981, into a Christian family. Throughout my childhood, we attended the same small Baptist church. My parents had been saved for about twenty years before I was born, and my grandparents were also Christians. At least as far back as my paternal great-grandparents, Christianity was a part of my family history. Yet, even with such a foundation and such an opportunity to be saved, I did not get saved while very young. I was told I made some kind of profession when I was four or five, but I remember growing up afraid I would miss the Rapture. More than once, I thought it had happened when I expected someone to be home and no one was around.

I memorized Scripture, play-acted church services by myself, sang all the hymns, and even witnessed to people at the public school I attended, but still I knew all was not well with my soul. One time, when I was about eleven, I was in a revival meeting at my church. During the hymn, Is Your All on the Altar?, I broke down and cried all through the song, not knowing what was wrong. I thought of that often from that time on, wondering what was wrong with me. Finally, when I was thirteen, I came to Christ for real. I had witnessed to a friend at school, and he just didn’t seem to understand, possibly because I presented the subject poorly, and I was especially concerned for his soul. I remember praying by my bed about one o’clock in the morning, and telling God how bad this guy needed to be saved. All at once, I seemed to hear the voice of God say to me, “And you’re just the same as him.” I saw myself as a sinner that day, and finally knew repentance in my heart.

By the time I was eighteen, I became concerned about what the Lord wanted with my life. One day, I prayed desperately for God to give me a verse to show me what I should do. My eyes fell on Ezekiel 33:7, and I knew the Lord wanted me to preach. I had already found myself spontaneously preaching to anyone who needed it, at work or at home, sharing whatever the Bible said about the situation. In January 2005, the Lord directed me to join Old Paths Bible Baptist Church, and I began to think about Bible institute. The year 2006 was particularly significant to me due to the fact that I was 24. In 1996, when I was fourteen, my 24-year-old brother Philip was killed in a car accident. When I turned 24, I became both reflective and apprehensive about my life. I thought often how some people only get twenty-four years to live, and how little I had done for God so far. A verse Philip often quoted, and which bothered his conscience often, was Luke 12:48, “For unto whomsoever much is given, of him shall be much required.” Determined to get busy serving the Lord with my life, I enrolled in Bible institute, graduating in May 2011.

My family has been attending conservative Baptist churches for as long as I can remember. As soon as I could understand that the lost go to hell, I wanted to get saved. This “mental assent to the facts of the gospel” caused me to say a prayer when I was 6. I was an obedient child, rarely in trouble, and my good habits persuaded everyone I was a Christian. Through the years, I often wondered about my salvation, even said a “sinner’s prayer” sometimes when I sinned, but I didn’t change on the inside.

When I got married and was on my own, my convictions all went away, and I realized I didn’t have any of my own standards. When my husband read his Bible, he always got something out of it, but I never did, so I stopped reading it. I even began losing interest in attending church. At our church, when a person comes to be baptized, our pastor usually asks them to give a testimony regarding their reason for being baptized. Often the person is someone who has attended our church for a period of time, and recently been saved. These testimonies always made me very uncomfortable.

Finally, in March 2011, I gave in to God. A few weeks before, our pastor’s daughter had come to be baptized. She told how she had said a prayer when she was young because she was scared of going to hell, but recently realized she didn’t have a relationship with God and wasn’t really saved. I was convicted but ignored it. Then another girl from our church came to be baptized. She gave her testimony that, because of Mary, she examined her own heart and realized she wasn’t saved, either. After baptizing the girl, the pastor asked if anyone else was moved by this testimony and wanted to be saved. I really wanted to stand up but was scared. What would people think? I have been going to this church for 8 years, was married here, and I have two children. However, I knew I couldn’t go on in my doubt and uncertainty. I went in the back room with our pastor’s wife, she showed me the verses, we prayed, and I knew immediately something happened to me that I had never experienced before. I finally had peace and felt all of the bitterness and doubt fade away.

We visited Romania in May 2011 for 2 weeks for my final Bible institute assignment. Christa had been there in 2006 when the Zander family was considering the work, but I had never been on a mission trip before. I had been seeking the Lord about full-time service since 2003, when I met Nico Verhoef at the Beale Street Blast in Memphis, Tennessee. I have always had a desire to be a missionary, but never seemed to find that right place. While we were in Romania, I began to see the work and to realize that was where the Lord wanted to use us.

We took a second, more specific survey trip in May 2012, began part-time deputation in December, and went on the road full-time in June 2013. We arrived in Romania in September 2017. We worked with multiple independent Baptist churches in Brasov until the fall of 2021, when we were asked to replace retiring missionary Jim Morgan in the area of Onesti, Bacau County. We arrived in the new location in January 2022 to begin the next phase of our ministry, focusing on the Bacau area, with much less involvement in the Brasov area.